Seat comfort: 6 out of 10. Not the most comfortable overnight of my existence, but not too ghastly.

Edibles/drinkables: They forgot my gluten-free meal, so I ate three or four squishy hot carrot batons and grumbled a bit.

Age ambience of craft: Hmmm, I didn’t really notice, so presumably nothing special. In-flight entertainment options were plentiful with at least 123 TV options. There was even an episode of one of my favourite shows, Meet the Sloths!

Fellow passengers: Mostly Scots, plus a cross, loud, bickery Canadian hipster type lady being taken home by meek Scots boyfriend to meet his family for Christmas. My, what a lot of things she was about to refuse to be a part of over the holidays!

Things I enjoyed: Views of Manhattan as we took off. The crew lady who made jokes about doing in-flight karaoke. Sadly, there was no in-flight karaoke, but there was a very odd flight safety video that made me question many things. Why are they using an origami plane? Could I really bring a tray of loose melons on board as my “personal item”? Why is that flight attendant chatting to a kangaroo? I didn’t blame the kangaroo when it bit him.

Things I did not enjoy: Bickerers. The turbulence that prevented me using aerial restrooms for some hours of the flight. The lack of sky-high karaoke. 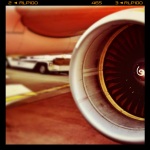 Seat spaciousness: Despite being in the dreaded middle seat of the middle seats, this nine-hour flight was actually not hideous, so the seats must have been reasonably roomy.

Seat comfort: 7.5 out of 10. Considering I’m giving this score for a middle seat, this is really like 300 out of 10. My only complaint was that I got a permanent crick in my shoulder from being forced to weld my right arm to the armrest in order to prevent the guy beside me from elbowing my entertainment system control panel emphatically at every hilarious point of whatever he was watching on-screen.

Edibles/drinkables: One dinner meal, one wee bottle of red wine and two cups of tea consumed. The chicken (in a creamy red pepper sauce, with salty broccoli and mashed potatoes) was actually very tasty! In fact, if I was served it in one of those mediocre Italian restaurants that my dad insists on frequenting, I’d be most quite delighted. It would be an exceedingly pleasant change from the desiccated chicken and industrial laundry dryer-blasted tomato concoctions they usually serve.

Age ambience of craft: Impressively new! The plane looked like someone had just whisked it out of its protective bubble wrap and gently popped it down at Gate B39 seconds before our flight. This was my first time on an infamous Dreamliner, which – on the basis of the DL’s, um, initial wee safety hiccups (aaargh, fire!) – I wasn’t quite as thrilled about as the cabin crew obviously were. But the staff seemed quite delighted with their good fortune and made much trumpeting about how lucky we were and how the vast plane was a plane-baby at just six months old. The lighting (soothing blues courtesy of the 787’s supposedly jet lag-reducing LED lighting) and crammed-with-options entertainment system were pleasingly modern. The taps in the toilets were fancier than any I encountered in Tokyo, famed home of high-tech toiletry. I’m sorry I didn’t have a window seat to try out the button-touch window blinds. Next time, Air Canada…

Fellow passengers: Rugby-thighed PhD guy on my left and bearded, retired husband guy on my right. PhD guy and myself watched Divergent and there was much hilarity as we compared how woeful we thought it was, although there was nowhere near as much high decibel guffawing as came from bearded guy while he watched seven billion episodes of something that, from my few peeks at it, must have been called British Upper Crust Dinner Table Buffoonery.

Things I did not enjoy: Not getting to play with the fancy high-tech window blinds. How much and how loudly my neighbour enjoyed his in-flight entertainment choices. A super fancy new plane with volume and light controls placed precisely where the person in the seat next to you will elbow them on, off, up, down or hurtle you into a terrifying, opera-blasting channel change just when you’re getting to the only gripping bit of some lacklustre dystopian teen vehicle.

Ahoy readers, whoever you are! Here is a new feature of this erratically updated site: Adding to the hotel reviews I have already started to scrawl (and the destination guide and site and restaurant reviews that I often smack myself for not having got round to writing yet), here’s a new feature/thingy/random piece of content… airline and airport reviews! 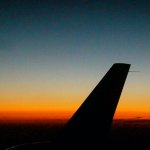 Seat spaciousness: Circulation to knees not cut off during flight, bonus!

Seat comfort: 4 out of 10. Lumpy! The seat back was like a badly assembled Zen pebble path. Lumpy is never a good word when used in relation to furnishings.

Edibles/drinkables: Two cups of tea consumed. My, those tiny wee cream capsules, once air pressured by a few tens of thousands of feet, really do blurt their contents an impressive distance! By the second one I’d learned to direct its frothy venom away from all items of clothing. By the third, I could have used it as a tiny dairy weapon.

Age ambience of craft: A big lumbering beast from the 1980s. It reminded me of the one that first brought me to the US in 1991. All that was missing was my Tiffany hair, penchant for faded denim dungarees and air of youthful amazement at the world.

Fellow passengers: Several furiously pushing hot dogs into their faces as they boarded as if they had to urgently cushion their intestines and esophagus against impending zero gravity.

Things I did not enjoy: Cream. With tea. Why, Air Wisconsin, why?

Is it me you\re looking for?

I have been a travel writer for two very entertaining decades. Often cities/ countries/ hotels/ airlines/ random surprising entities invite me places and expect me to say nice things. Often magazines have an ad for the hotel or city being written about, so the editors want me to say nice things. Other editors just have a policy of not covering a place if it turns out to be rubbish.

And I usually say that every place suits SOMEBODY, albeit sometimes that somebody might have to be partial to mould or sharing their room with a flotilla of creepy crawlies or have a penchant for walls so thin you are in danger of getting a paper cut when you cascade out of bed... but here, on Angry Sea Turtles, nobody is paying me to only focus on the good bits in my hotel reviews and destination guides. Here I can tell you if a place has rooms that smell like they were recently used by the local amateur taxidermy club or if the restaurant owner has particularly ominous eyebrows. Angry Sea Turtles, has real, truthful, honest hotel reviews, restaurant reviews, airline reviews, airport reviews and destination guides... taxidermy odours, ominous eyebrows and all. xxx